Dan Gustafson is one of the most well versed and studied experts in the State of Minnesota when it comes to land use rules and water rights (riparian rights mn), having studied the issue extensively for a period of about two years. Dan bought a sliver of land about the width of his arms in order to build a dock and park a boat on Medicine Lake in Plymouth, MN in 2013. The City and his neighbors inappropriately blocked his right to build a dock for several years, until Dan won the argument and the day by installing the dock and winning the battle. If you have a question about your riparian rights mn, reasonable use, or if you have a municipality or other government agency or neighbors attempting to restrict your right to wharf or build a dock, feel free to reach out to Dan and tell him your story. It's likely he will be able to help you and your attorney navigate these difficult situations. You can reach him at (952) 473-1000. (FYI-Not an attorney)

You might have read about my war with the City of Plymouth over the right to install a dock on vacant lakeshore on Medicine Lake—it was on the front page of the Star Tribune in 2014 and ran on all the local TV stations.

The City of Plymouth understood the issue incorrectly—thinking that Minnesota riparian rights / water rights and aids to navigation (a dock) can be governed by land use rules. This position is without merit. Medicine Lake and Bassett Creek are connected to the Mississippi river, and have been historically used in interstate commerce. For this and other reasons, federal jurisdiction applies. (33 CFR Part 329)

The magical dividing line according to the federal code of regulations, state statute (103G.005, Subd. 14), and the municipality is the Ordinary High Water Level. Land use rules are on the land side, water rights and rules are on the water side. You cannot be required to build a home on the land in order to exercise the right to wharf. (Minnesota Riparian Rights)

Water law in the State is well settled, whether on Lake Minnetonka or the other bodies of navigable water. In 2004 the Minnesota State Court of Appeals 2004 examined a similar issue in LMCD vs. Canning. To characterize the opinion of the court, the LMCD has the right to regulate (appropriately so), but not prohibit a dock.

Of course the neighbors had the opportunity to purchase the property multiple times prior to my acquisition but did not. Once I acquired an interest then they wanted City Hall to fight the legal battle and pay the legal bills to prevent the use of the land and water in the interests of aesthetics--which is simply not allowed.

Riparian Rights MN is a complex issue. If you or someone you know in this area or state wide is having a problem installing a dock, please have them reach out to me. I’d be happy to provide my expertise.

STRUCTURES IN PUBLIC WATERS: https://www.revisor.mn.gov/rules/?id=6115.0210 Subp. 4. No permit required. No permit is required for the following activities, unless prohibited under subpart 3: A. to construct, reconstruct, or install a dock, floating or temporary structure, watercraft lift, or mooring facility if: (4) the structure or mooring facility is consistent with or allowed under local land use controls, as determined by the local government land use authority;

Bradshaw v. Duluth Imperial Mill Co., 52 Minn. 59 (1892) It has been decided over and over again by this court that the right of the riparian owner to improve, reclaim, and occupy the SUBMERGED LAND IN FRONT OF HIS SHORE ESTATE to the point of navigability is a vested property right, which cannot be taken away, even by the state for a public use, without compensation. Brisbine v. Railway Co., 23 Minn. 114; Union Depot, etc., Co. v. Brunswick, 31 Minn. 297, 17 N. W. Rep. 626;

MN DNR The ordinary high water level (OHWL) is the landward extent of DNR jurisdiction over anyone who works in the bed of public waters or public waters wetlands... It has no significance with respect to private ownership. http://files.dnr.state.mn.us/waters/surfacewater_section/hydrographics/ohwl.pdf

PLYMOUTH ZONING ORDINANCE: Lot Area: The total land area of a horizontal plane within the lot lines (excludes areas below the ordinary high water level of public waters). (Amended by Ord. No. 2011-05, 02/22/11) (21005-22) (g) Ordinary High Water Level: The boundary of public waters and wetlands, and shall be an elevation delineating the highest water level which has been maintained for a sufficient period of time to leave evidence upon the landscape, commonly that point where the natural vegetation changes from predominantly aquatic to predominantly terrestrial. (21005-36) Yard, Shoreland: A yard which is typically a rear yard extending across a lot and being the required minimum horizontal distance between a structure and the ordinary high water level of a public water as established by the City Storm Drainage Plan and Department of Natural Resources. (21005-48)

Riparian Rights MN is a complicated issue. Feel free to call or email about your issue. Disclaimer - It should be noted I am not an attorney, nor do I practice law. 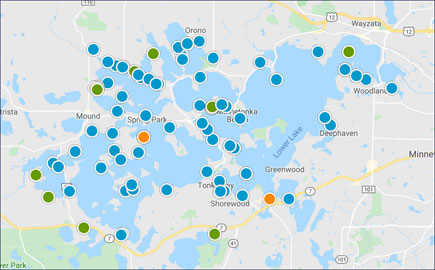